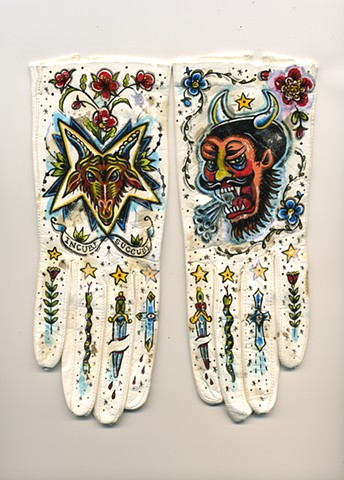 An incubus is a demon in male form who, according to a number of mythological and legendary traditions, lies upon sleepers, especially women, in order to have intercourse with them. Its female counterpart is the succubus. An incubus may pursue sexual relations with a woman in order to father a child, as in the legend of Merlin. Religious tradition holds that repeated intercourse with an incubus or succubus may result in the deterioration of health, or even death.

I love to shake up conventional associations people have with objects and ideas. Traditional American tattoos are made of up small glyphs that work as a shorthand to communicate basic human emotions. The heart, star, snake, dagger, pin-up, and skull are just some of the basic building blocks of this visual language. Jung called these blocks "archetypes" and wrote extensively on the effect these images and ideas have on our unconscious mind.

The glove is more than just a practical protection from the elements. Its a metaphor for a kind of traditional modest femininity. The gloves I use are roughly dated from the 1900-1960s, a time when ideals of feminine purity and class status were closely tied to the fashion standards of their time. What images are masculine, what are feminine, what are certain ideals and expectations associated with these and how can I subvert those standards drive this work body of work.