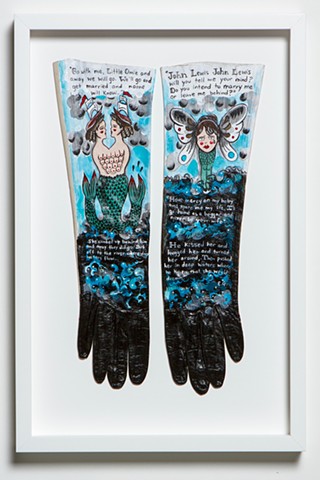 These gloves are based on the folk tune "Little Omie Wise". The historical facts of this song is as follows (credit Murder Ballad Monday) http://singout.org/2012/01/09/omie-wise/

"The events of “Omie Wise” can be pinned down to a known historical event—the drowning of Naomi Wise in Randolph County, North Carolina in 1808. Jonathan Lewis was known to be involved with Naomi, who was an orphan living with the family of William and Mary Adams. Naomi was possibly already a mother of two children out of wedlock before meeting Lewis. In the song, she is pregnant with another child, likely his. Lewis was arrested for the crime, but escaped jail. He was captured again years later, tried and convicted for breaking jail, but never convicted for her murder."

This historical fact need not dilute the mythic metaphor that inspires this work. Though Omie Wise was a historical person, the inspiration for these gloves is more a mermaid tale.

The lyrics: "He kissed her and hugged her and turned her around then pushed her in deep waters where he knew she would drown" placed in contrast with the image of the mermaid creates a narrative that cannot end with death.

The mermaid is a creature that survives in water; she cannot drown. Even in the destruction of love there can be a rebirth- a kind of new form that can survive even the darkest, deepest waters.