I am a seeker of my own internal equinox. A seeker of the light and dark balance within my psyche through an intuitive image making process grounded in traditional oil painting, western tattoo iconography, found objects, and embellished garments. I seek to create images from my embodied experience of the feminine and to reach an authentic vulnerability and purity of expression. I study, dissect and reformulate images of the stereotypical “good mother” which I find hostile to my sense of self and seek balance in the narrative of my own identity. Somewhere between the sweeping scope of a fairy tale and the intimacy of a diary, my work attempts to recenter myself as the hero of my own story. My work is a love letter to my own resilience and serves as a map to how far I have come both personally and as an artist. My work is inspired by the work of Frida Kahlo, Alice Neel and Louise Bourgeois. I see my imagery as a continuation of their vulnerable, personal expression.

Images in this gallery are from a series and show titled: "Invisible Mother's Milk" Packer-Schopf Gallery 2013. I had been working on a series of gloves and tattoo imagery that upended sexual norms perpetrated via traditional American tattoo iconography. In that exploration I became interested in imagery as it related to my own personal experience with mental health and motherhood. In my usual hunting for vintage gloves and objects to use in my artwork, I came across a strange and haunting image that resonated with something deep inside of me. It was an “Invisible Mother” photograph of the victorian era. These photographs were evidence of a practical solution to the technical problem of photographing a wiggly baby/toddler with the long exposure times that photography of this era require. The child would be held still on the mother’s lap which was draped with a heavy decorative cloth that went up all the way over her torso and head. The mother would be obscured further when the final tin photograph was put into an oval matted sleeve, which revealed only a child nestled in a draped “background”. Over time the paper matting on many of these photographs have disintegrated revealing the once “invisible” mother, resulting in both horrific and absurd images. In some the mothers hands and/or feet would be visible creating an image of an absurd furry half rug/human holding a baby awkwardly, other times just the draped head shape loomed behind the child’s head creating a menacing ghost image. In looking for more of these images I also came across later period photographs from the 50’s and 60’s that expanded more on this concept of invisibility. Just some of the additional motifs that emerged were: A ghost image of a female hand at the very edge of a studio shot of an infant, a mother holding a baby on a street scene where the photographer deliberately cropped her whole head and torso, an extra pair of legs peaking out behind a boy sitting on a horse. But always there was a poignancy and a sense of grief that I felt when I looked at these images. I reflected on where I had become invisible trying to live up to idealized motherhood. This would be my seed image. As a concept, it held presence and invisibility, light and dark, birth and death imagery all in one. It felt familiar, it felt mournful, and I felt it touch a part of me inside that me that was struggling to find the balance in my own life. From these found photographs, all the other images for this show derived. 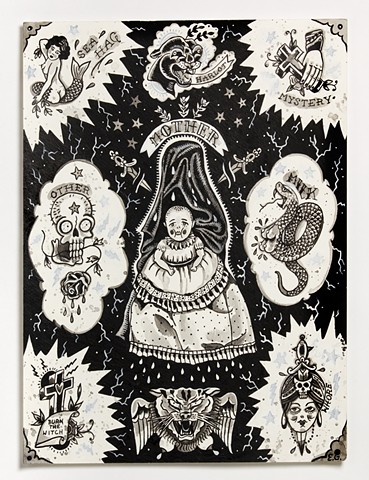 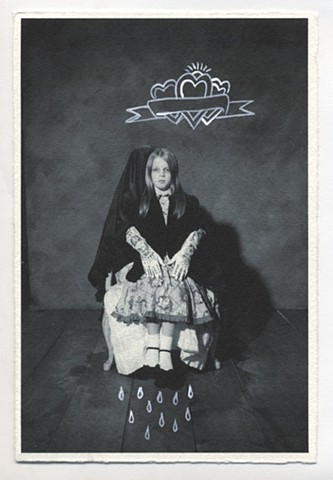 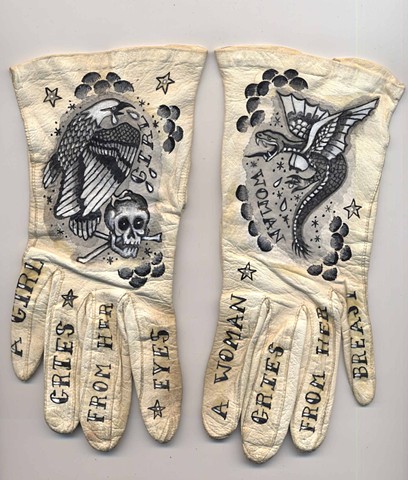 "Girl Cries From Her Eyes..."
acrylic on vintage gloves 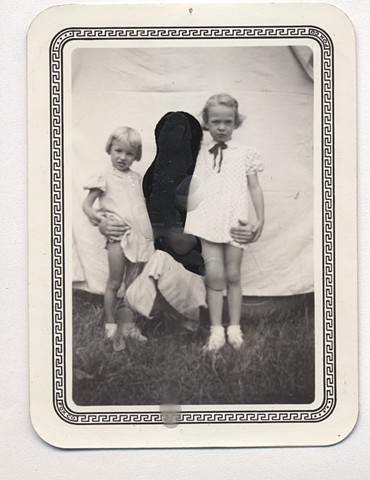 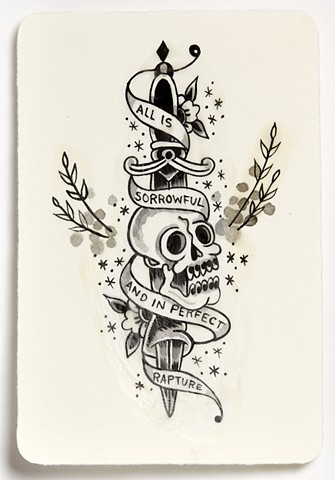 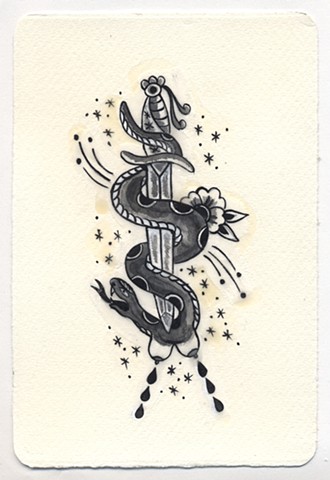 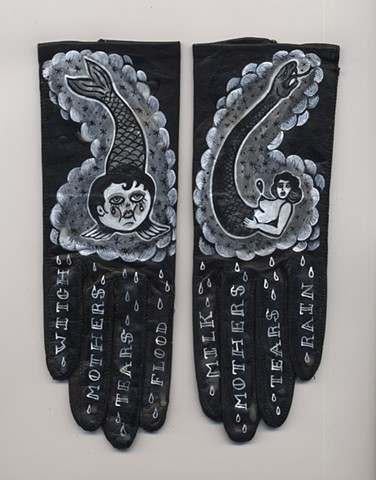 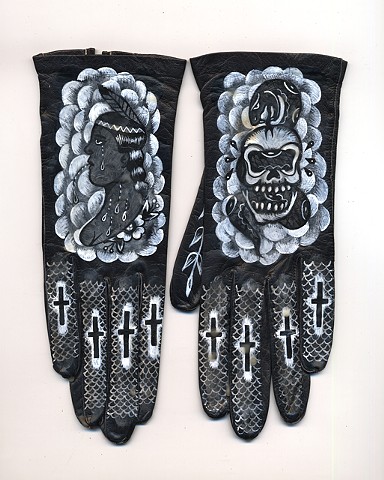 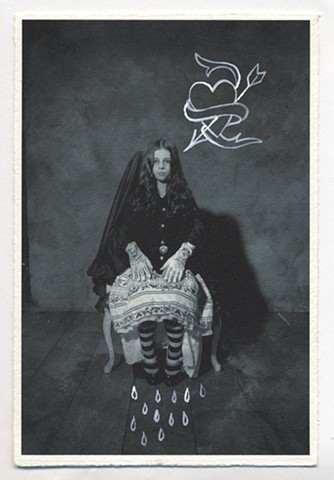 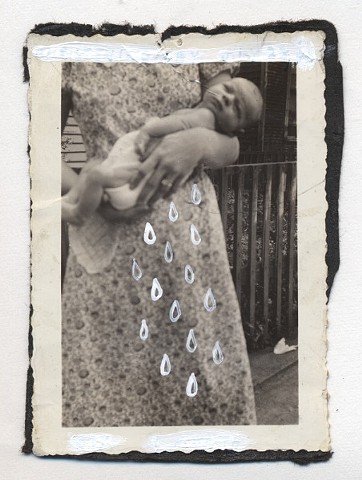 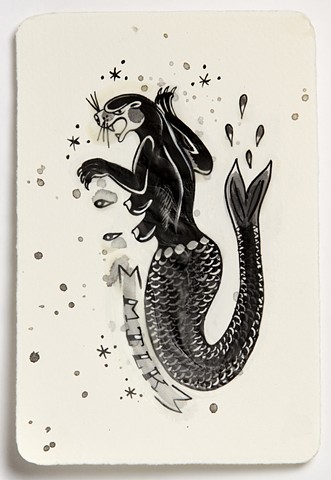 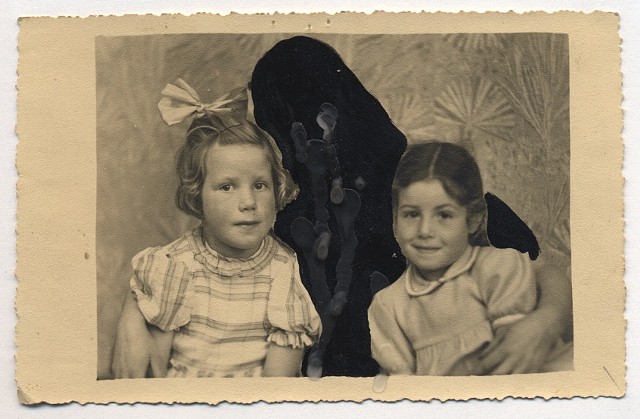 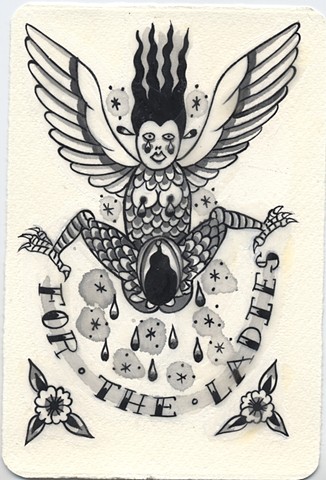 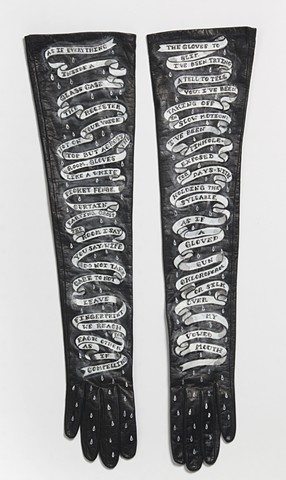 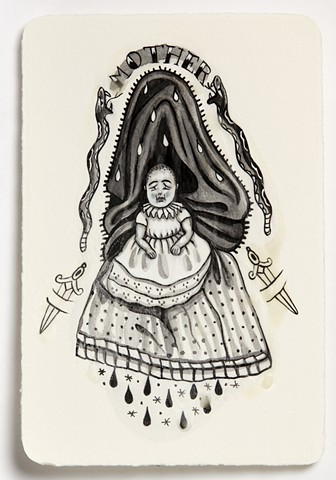 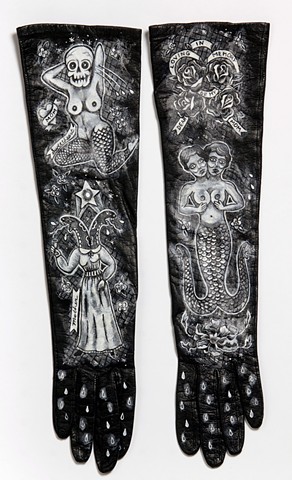 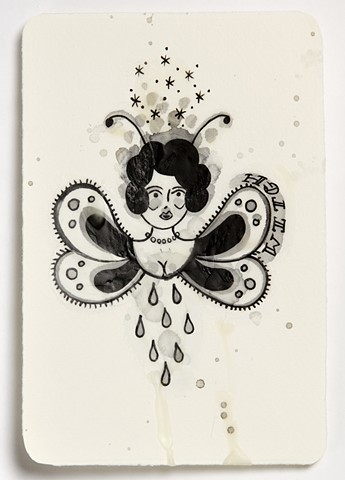 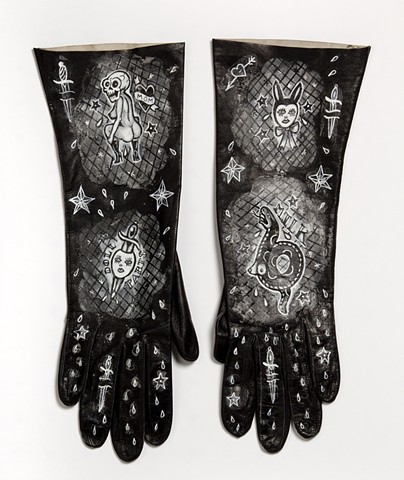 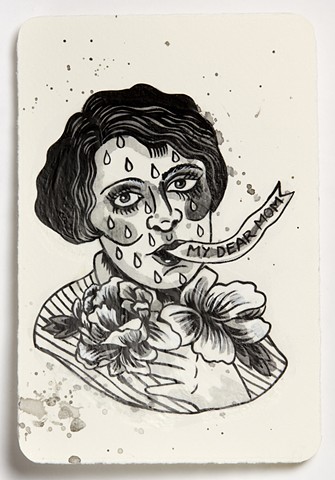 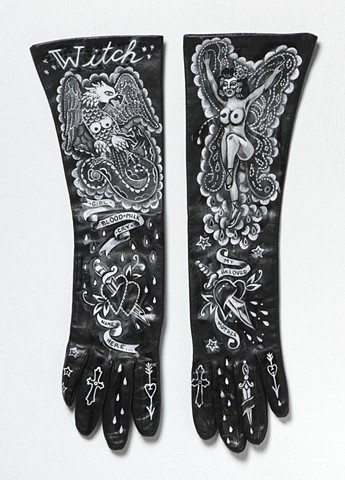 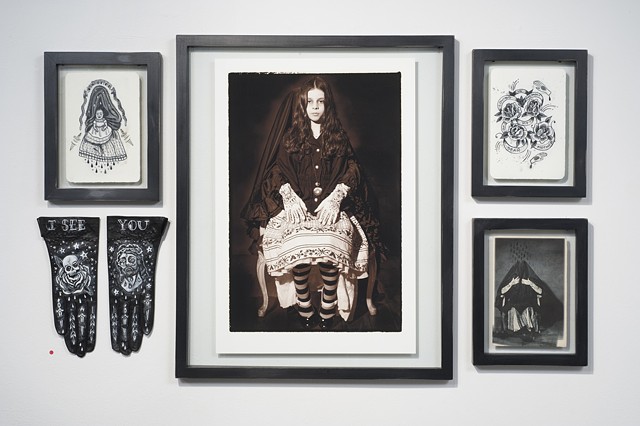 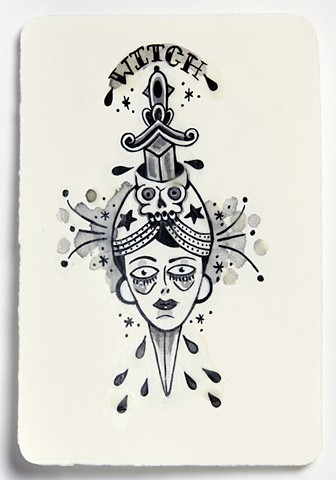 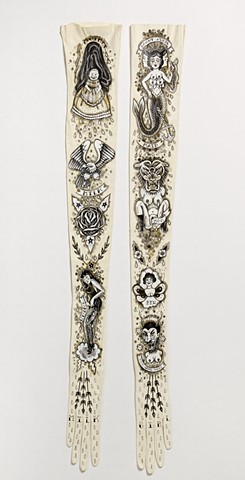 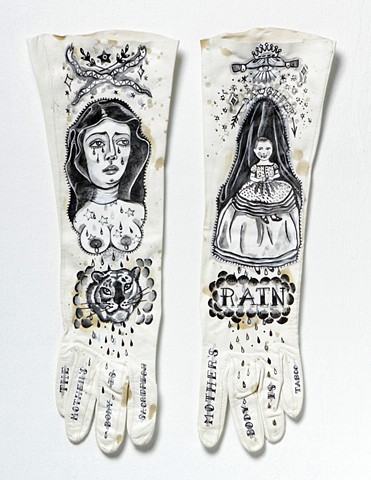 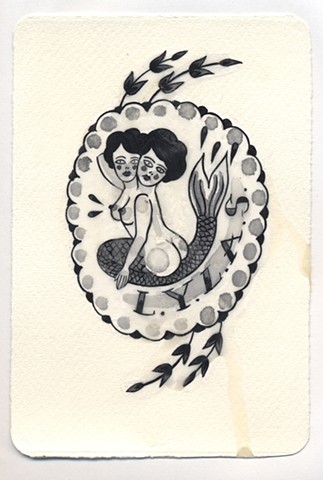 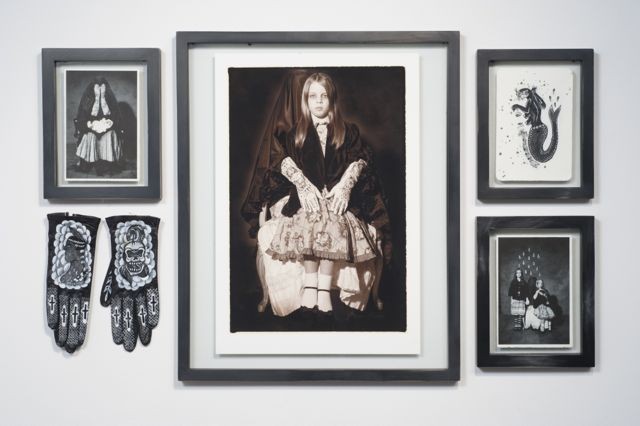 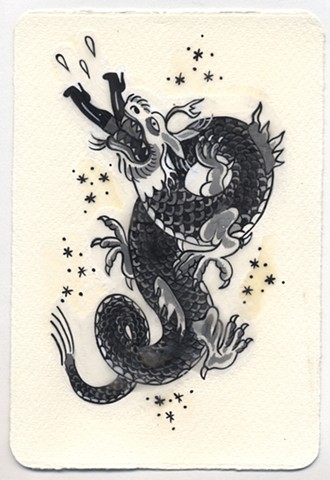 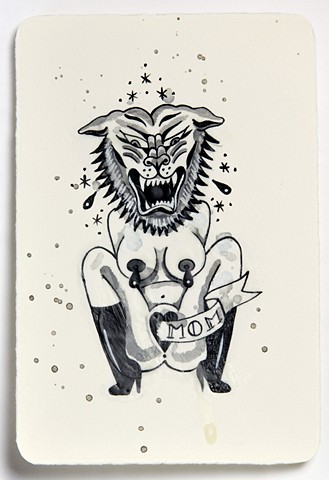 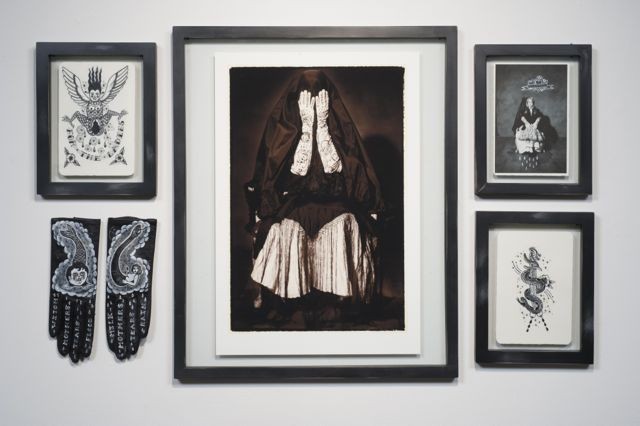